When you hear "ET" do you straight away think about that cute little extraterrestrial who wanted to phone home? If so, then it's my guess that you don't have, or may never even have heard of Essential Tremor, ET for short. People like me who have ET (the neurological disease, not the alien) suffer from a condition that makes them shake. In my case it's mainly my hands that are affected but often I feel a low level of tremor in my arms and legs as well. You can get it in your voice and head too (think Katharine Hepburn in On Golden Pond). Although it's not pretty and it can make life very difficult, if you had to have a neurological disease then I suppose ET would be high on the list of the ones you'd prefer. You might occasionally feel like dying from embarrassment (particularly when eating or drinking in public) but in reality the shaking won't kill you.

Considering how many people are affected by it (over 10 million in the United States alone) we hear very little about this condition. Most likely that's because people who have ET generally try to hide it. I certainly did and to a certain extent I still do. In my mid 20s I started to notice shaking in my hands and by my late 30s the tremors were making teaching very difficult. I trained as an art teacher and losing my ability to draw smoothly or write on a board (among many other things) eventually persuaded me to leave that career behind. Maybe if there had been more awareness for ET I would've had the confidence to continue teaching.

A few years ago I tried acupuncture and while it helped, unfortunately the benefits wore off after a short time. Because the acupuncturist recommended that I try meditation I decided to learn how to do the Six Healing Sounds Qigong exercises. This ancient Chinese form of meditation is both calming and energizing and one of the many tools that I've come to rely on to help me to cope. Anxiety doesn't cause this disease but because adrenaline makes tremors worse, learning how to stay calm is important for anyone with ET.

I'm 46 years old and although I once felt robbed of my career by this disease, that feeling changed when I wrote and illustrated a book showing children how to overcome stressful emotions with the Six Healing Sounds. Contrary to how I once felt, I now see that ET has led me to my heart's desire. This is the most fulfilling and interesting work I've ever done. And, knowing that I'm helping people, including children who have ET or other conditions that are made worse by stress, is incredibly gratifying.

Obviously illustrating with trembling hands is no picnic but like most things in life there are ways around it. ET, like many of the challenges we face, may bring an end to some things but it can also open doors to new and life-changing possibilities. Please help me to create awareness for ET by sharing this post. Greater understanding would make a big difference to millions of people like me who would love to feel less self-conscious about shaking in public. Thanks so much for reading this. 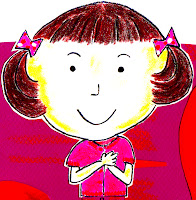 Singing Dragon
Posted by Unknown at 9:24 AM